The egg has long been considered the perfect food, with the yolk containing a high concentration of nutrients that are essential to human health, including many different proteins. The proteins in egg yolk are 68% low density lipoprotein (lipovitellin), 12% high density lipoprotein, 12% livetins (which contains the 0.7% IgY), and 7% phosvitin. The protein profile of egg yolk makes it an excellent source of nutrients for the human body with multiple reports showing lipid free egg yolk protein (EYP) to have a perfect amino acid score of 100. Tests have also shown Egg Yolk Protein (EYP) to be digested faster than milk casein and that the nutritional value of egg protein is of a greater value than milk casein.24

While these proteins are known to be present in egg yolks, there has always been great difficulty in separating and concentrating them in commercial quantities. This is due to the complex chemical bonds between these protein molecules and the nature of the current toxic solvent- based extraction process for producing the plasma products (phospholipids), which de-nature and contaminate the residual granule products (protein).25

Ecovatec’s proprietary technology, which doesn’t use hexane or other toxic solvents and operates at low temperatures and pressures, allows the EYP to remain intact and enhance all of its functions, which can then be further concentrated after separation from the plasma. The benefits of these proteins are now available and can be used to help create healthier lives. We have barely scratched the surface when it comes to the health and wellness benefits of egg yolk proteins.  After being regarded as a contaminated and de-natured protein, we are excited to be at the forefront in bringing nature’s most powerful and health enhancing proteins to the health, food, and cosmetic industries.

Phosvitin is one of these exciting proteins and is truly considered a “wonder” protein.  Previously only available for research purposes at $3000/Gram, Ecovatec is the first producer of phosvitin and phosvitin-phosphopeptides in commercial quantities for Food, Nutraceutical, Biomedical, and Cosmetic applications.  Hen egg phosvitin was first isolated by Mecham and Olcotte in 1949; and when analyzed, was found to be exceptionally unique. It is the most highly phosphorylated protein that nature has to offer.26 Out of the total of 217 amino acid residues in the egg yolk, 124 are monoesterfied with phosphate.27 Phosvitin accounts for 60% of all the phosphoproteins and contains 90% of the phosphorous in egg yolk.28

Ecova-PepTM has numerous unique bio-active functions and applications, but is particularly sought after for its ability to dramatically increase the uptake of calcium and iron (9 times more effective than lactoferrin, and 5 times more effective than casein from bovine milk).  As such, it is considered a better preservative against E.coli and Salmonella than lactoferrin.  Only EDTA, a synthetic acid, binds minerals better than phosvitin.

Phosvitin has been found to play a role in the regulation of calcification during embryonic development and can inhibit the oxidation of phospholipids, but to truly utilize the potential of phosvitin, it needs to be broken into peptides for its iron and calcium binding qualities (more below).29  These peptides help with bone and dental health, as well as have antioxidant and anti-inflammatory properties.30

The use of phosvitin as a viable ingredient in foods has always been downplayed because there has never been an effective way of producing it. Until now, all of the extraction processes used to separate phosvitin have involved chemicals not fit for food products, which produced small yields with poor purity. Through Ecovatec’s clean technology, the amazing potential of Phosvitin is unbridled.

Phosvitin itself is actually considered to have a negative nutritional value due to the fact that it is difficult for humans to digest.31 In order for long chain amino acid proteins, like phosvitin, to become bio-available, they must be cut into short chains, called peptides.32 These peptides each contain receptors that allow them to bind with other molecules making them available for use by the body. They are incredibly bioactive and have wonderful properties that are beneficial for human health and food preservation.33 Once these peptides are released, they have been shown to have great antioxidant (second only to EDTA, a synthetic acid) and anti-inflammatory properties, as well as to help with the body’s absorption of calcium and iron.

Naturally derived bioactive molecules, like phosvitin phosphopeptides, have increasingly been used for health supplements and food preservation. This is due in large part to the fact that these bioactive peptides are natural and therefore safer than synthetic antioxidants. In today’s market, phosphopeptides are most commonly produced from milk casein. These casein peptides have been shown to share many of the same qualities of phosvitin phosphopeptides, including their calcium binding abilities. However, as stated before, the phosphates present in egg yolk phosvitin vastly outnumber those in milk casein, resulting in egg yolk phosphopeptides having a much greater capacity to bind calcium and iron.34

Phosvitin seems to have a critical role in the tissue calcification of embryonic development in chickens.35 This effect of phosvitin, however, does not seem to be replicated with the human consumption of eggs. The phosvitin itself has a strong attraction to metal ions and is difficult for the body to digest, resulting in much of the calcium and iron present in eggs to simply pass through the body.36 Once the phosvitin is broken into phosphopeptides the real work begins. Phosphopeptides can effectively bind to calcium, acting as a catalyst and allowing the digestive system to process them.37 They also prevent the formation of calcium phosphates, which are insoluble and the body cannot use.38 Studies have shown that phosvitin phosphopeptides are much better at solubilizing calcium than casein phosphopeptides.39 This is due to the abundance of phosphates in phosvitin. The increase in calcium solubility in the body has been shown to enhance the calcification of bones and help in the prevention of osteoporosis.40 This increase in calcium absorption and accumulation has also been clinically shown to help in the development of stronger teeth. Phosphopeptides helped to stabilize high concentrations of calcium and phosphate ions on the surface of teeth by binding it to pellicle and plaque.41

36. Similar to taking calcium supplements in pill form. It is difficult for the human body to absorb calcium and iron without a natural delivery system.

37. Y. Mine and J. Kovacs-Nolan, “Biologically Active Peptides Derived from Egg Proteins,” XIth European Symposium on the Quality of Eggs and Egg Products, (2005): 347.

Phosvitin Phosphopeptides also help in the body’s processing of iron. Much like with calcium, peptides bind with the iron molecules making them soluble and allowing the body to process them, thereby preventing a buildup of insoluble iron in the body.42 This process of chelation is very important for maintaining a proper level of iron in our bodies. Excess free iron in the body may lead to the oxidation of the heart muscles and eventual heart failure. A surplus of iron can lead to the formation of the hydroxyl radical, which has been known to cause cancer.43 Phosvitin phosphopeptides prevent the formation of these insoluble iron complexes which cause the iron levels in our bodies to rise to unmanageable rates.44 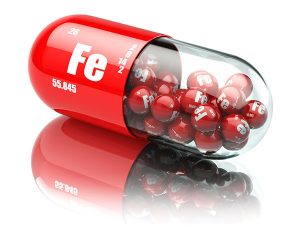 The ability to chelate iron ions is also beneficial in the food industry. The oxidation of lipids is a concern for the preservation of foods. The faster the oxidation, the faster the food will become rancid, with poor colouring and bad flavours.45 Phosvitin has been recognized as an excellent antioxidant protein because of its strong attraction to, and ability to bind with, ionic iron.46 Moreover, phosvitin is much more effective than other iron binding proteins or metal chelators at inhibiting the iron-mediated oxidation of phospholipids.47

Recently, the demand for natural antioxidants has increased, with many of the synthetic antioxidants being called into question for their potential health concerns.48 Phosvitin is a natural solution to the antioxidant problem.

Tests have shown phosvitin phosphopeptides to also have anti-inflammatory properties.49  Inflammation can cause great discomfort and is the underlying root of many disorders, including inflammatory bowel diseases like Crohn’s and ulcerative colitis.  Many drugs are used to treat these diseases, but they can have unwanted side effects and toxicity. Phosvitin phosphopeptides are a natural, safe solution with anti-inflammatory properties that can provide relief for those suffering with many of these ailments.

Studies have also shown that an excess of oxidants in the body can lead to oxidative stress, causing damage to cell components and the cell structure as a whole. Recently, it has been shown that these oxidants are also the greatest cause of inflammation, contributing to diseases like cancer, Parkinson’s, Alzheimer’s, Crohn’s, and colitis.  Phosvitin peptides, because of their great antioxidant properties, have also shown great anti-inflammatory properties.  This is again due to their incredible ability to chelate oxidants.  In addition to this, peptides have also been shown to actually inhibit the body’s secretion of pro-inflammatory cells, which help stop the inflammation at the source.50

Egg yolk also contains a number of other proteins and nutrients that are beneficial for human health.51 Recent studies have also shown great evidence that egg yolk proteins have benefits much greater than just fulfilling basic nutritional needs:

56. Meike Bunger et al., “Bioavailability of lutein from a lutein-enriched egg-yolk beverage and its dried re-suspended versions,” International Journal of Food Sciences and Nutrition 65, no. 7 (2014): 903.